Believe it or not, there is actually an entire subculture that loves not just food puns, but pho puns. Pho (“fuh”) is a Vietnamese noodle soup made up of a clean, savory broth, fresh rice noodles, aromatic herbs, and tender, juicy meat. Or at least that’s what pho at Turtle Tower is like.  You might’ve seen it on the 7×7 100 Things to Eat list, or maybe in one of its 2,000+ positive Yelp reviews (heck, do I even have that many Facebook friends…?). If not, Alex and Kristina over at Bites by the Bay wrote a good homage to Turtle Tower’s Pho Ga (Chicken Broth Pho) that you should check out.

Point is, Turtle Tower is the star of our next event (punnily titled “Pho Shizzle“), so we thought it would be irresponsible of us to not write a post on pho puns…just for conversation starters during the event, you know. So here are our 10 favorites! If you have others, tell us!

Absolutely Pho-bulous. Not sure how this is pronounced…and whether it means fabulous or fabulously fobby.

What the Pho? You probably see a trend emerging here. 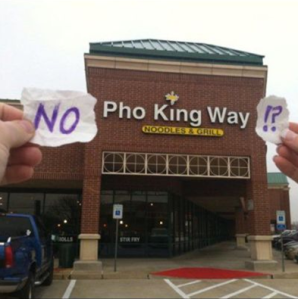 Hot as pho. Not just for restaurant names…can be seen on cute girls, too! (Guys, this also doubles as a decent pick up line).

Friend or Pho. Okay, the pronunciation is off, but we liked the concept.

Pho Kim Long. Say it out loud. What’s great about this one is that it wasn’t even planned.
Craving some warm, hearty pho now? Sign up for Turtle Tower‘s Pho Shizzle event on October 29 before it sells out! You can look forward to joining Turtle Tower‘s Chef and Founder Steven Pham as he retells his journey of 10,000 miles from his beloved homeland, Hanoi, Vietnam to San Francisco to bring authentic Hanoi-style Vietnamese cuisine. Get an exclusive, guided tour with Chef Steven of Turtle Tower‘s new, open kitchen where you’ll see up close and personal all the steps of making and assembling pho. After, customize your own, off-menu bowl!

One thought on “So Much Pun – Vietnoms (get it?) Version”